Currently reading: A Darker Shade of Magic by V.E. Schwab. I'm enjoying this so far but not had much chance to read it recently, and I really don't want that to affect my thoughts on it! It feels like the kind of book you have to read in a couple of sittings, but we'll see!

The Demon King (Seven Realms, #1)
Recently finished reading: The Demon King by Cinda Williams Chima. This was such an up and down reading experience for me. I really didn't get into it at first - I found it slow going with not much action or plot movement, but I kept plodding on because it has such good reviews. I then got to the last 100 pages and I really started to love the story. Now that I've read this first one, I think the rest of the series will really take off, so I will definitely be carrying on with the series!

Reading next: I'm playing #bingobookathon over on Instagram (hosted by nicole_in_neverland) so my next book will come out of my bingo TBR jar!

Link me your WWW Wednesday post down in the comments so I can see what you've been reading recently!

Review - The Girl of Fire and Thorns by Rae Carson

Once a century, one person is chosen for greatness. Elisa is the chosen one.

But she is also the younger of two princesses, the one who has never done anything remarkable. She can't see how she ever will. Now, on her sixteenth birthday, she has become the secret wife of a handsome and worldly king—a king whose country is in turmoil. A king who needs the chosen one, not a failure of a princess.

And he's not the only one who seeks her. Savage enemies seething with dark magic are hunting her. A daring, determined revolutionary thinks she could be his people's savior. And he looks at her in a way that no man has ever looked at her before. Soon it is not just her life, but her very heart that is at stake.

Elisa could be everything to those who need her most. If the prophecy is fulfilled. If she finds the power deep within herself. If she doesn’t die young. Most of the chosen do. [Goodreads]

Overall, this was a really good YA fantasy - it was fast-paced and action packed which is exactly how I like my fantasy and I felt like it set the series up really well. There was enough world building that I knew how everything worked, but not so much that it felt like I was being info-dumped which is always a big plus.

I was, however, worried when I first learnt of the Godstone - this shows Elisa is the chosen one and it's basically a gem stone in her belly button - this kind of freaked me out a bit and sounded so weird! It also warms up or cools down her whole body depending on the situation surrounding her (ie. it can alert her to danger) but I was still feeling squirmy over the whole thing. I also didn't know that a large basis for this plot is religion and how different interpretations among the devout can change so much. I don't usually enjoy books with religious undertones - they just aren't for me, but surprisingly I didn't mind it in this one. I think because it was put in a fantasy setting and was a religion from the author's imagination that changed how I approached it, but I'm really glad I didn't give this book a miss just because of this plot device.

I did really enjoy the direction the plot took though - there was so much happening and I actually feared for the lives of the characters which made this quite an intense read. I also loved the setting - without giving too much away you're taken to different castles within the kingdom and out into the desert and I loved seeing Elisa cope with the changes and the difficulties she was put through.

Elisa definitely made this book so much more enjoyable for me - she felt so honest and real and I can't wait to spend more books with her. She's confused about her feelings, she lacks self confidence in her strength as a future queen and she's put through all these different situations whilst still learning who she really is away from the protection of her family. She's also overweight, and whilst I appreciated this difference from our normal YA heroines, I didn't like how differently she was treated once she lost some of the weight by certain characters, however I suppose this would be realistic.

There were love interests in this book, but it isn't too heavily focused on them which I liked, and even though she has mixed feelings there's no love triangle as such. I can't wait to see how Elisa handles her public marriage in the next book and how that will change her.

I can't really discuss other side characters without spoiling the plot, but just know that I loved them all and I really hope some of them make an appearance in the next book. I'm also looking forward to seeing Elisa's relationship with her step-son Prince Rosario develop.

I liked Rae Carson's writing style - she's very talented at what she does and I think she writes really well in the fantasy genre. The pace was perfect in my opinion and her action scenes were brilliant - very suspenseful and I never felt confused as to what was happening. I also loved the descriptions of the land as Elisa traveled to different parts. Each different place stood out and I really liked how she had different emotional connections to different parts of the kingdom. I'm definitely excited to see where Rae Carson takes us in the rest of the series and how she writes romance (that I'm hoping develops between certain characters!) 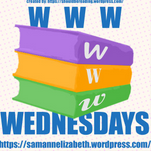 Currently reading: The Demon King by Cinda Williams Chima. To be honest, this has been a slow starter for me, but I've heard such wonderful things about it that I want to finish it. I'm hoping it picks up soon and drags me in, but I'm about half way through (and it's 500 pages!) and not much is capturing my attention yet.

Days of Blood & Starlight (Daughter of Smoke & Bone, #2)
Recently finished reading: Days of Blood and Starlight by Laini Taylor which is the second book in the Daughter of Smoke and Bone series. It had been a few months since I read the first, so it look me a while to get back into the story, but once I did I was swept away by Laini Taylor's writing and beautiful storytelling. 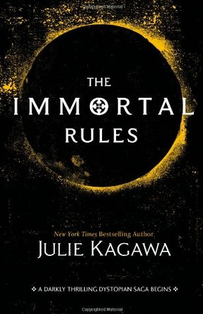 Allison Sekemoto survives in the Fringe, the outermost circle of a walled-in city. By day, she and her crew scavenge for food. By night, any one of them could be eaten. Some days, all that drives Allie is her hatred of them, the vampires who keep humans as blood cattle. Until the night Allie herself dies and becomes one of the monsters.

As far as vampire books go, this was one felt very original and as soon as I read the first few pages I felt like I was going on a whole new adventure. Perhaps it's the dystopian setting - Allie lives in the outskirts of a designated vampire city years after a plague wiped out civilisation as we know it now and created a certain type of vampire called a 'rabid' (think zombie vampire!). This definitely upped the creepy factor for me, as Allie was not only contending with vampires and rabids, but she also had to figure out life as an 'Unregistered', meaning she never knew where her next meal was coming from or if she would even survive the night.

One night, Allie gets caught by rabids who near enough kill her only to then be given a choice by a vampire on-looker - be put out of her misery and be killed, or carry on 'living' as a vampire. She's grown up her entire life detesting vampires and everything they have turned the world into, but I really like that she took the choice to carry on living and become one, even with her morals. From then on, we watch as Allie learns this new way of life and see her join a group living out in the wild. I found that the plot slowed down a bit for me during this middle section, however, I still really enjoyed what I was reading. It became more of a survival story at the point - scavenging for food, travelling and finding places to camp - but with a very 'The Walking Dead' feel to it due to the rabids roaming around.

Then came the fantastic ending and I was thrown back into a whirlwind of action, terror and secrets coming to light. You're left wanting the second book, but the cliffhanger isn't so horrible that it makes you want to tear your hair out!

Allie is one of my new favourite female characters - she was such a fighter and a survivor. She looked after herself, was kickass and sassy and struggled daily with her inner demons. I think I fell in love with her most when she was living as a vampire with the group of humans out in the wild - she wanted to keep her humanity and not turn into the vampires like she'd been surrounded by in the city, but her animal instincts for blood swayed her morals and dedication on a daily basis. She soon found out she couldn't survive on animal blood (like a lot of other fictional vampires) and then had the make the decision of who to feed off of - and then deal with the consequences of that. I found this fascinating and it added such a great twist onto vampire stories I've read before.

I also really liked all the characters of the group living in the wild - they all had flaws and ways of dealing with their situation that made each one feel very real to me. I don't want to go too much into them as I think it's best not knowing much about them before reading the book, but I loved that you never quite knew where you stood with them, or what they were really thinking.

I loved Julie Kagawa's writing - I've never read her Iron Fey series so I wasn't too sure what to expect, but I was totally captured by the way she weaved the story. Her descriptions were brilliant - she made building up the world in my head feel so seamless that I was never dragged out of the story because of something jarred, and the whole novel felt very atmospheric.

I also really liked how she could put me on the edge of my seat but then take me somewhere totally unexpected, or have a character react in a way that I just didn't see coming. Her writing is definitely what made this a 5 star book for me, and I'm so excited to jump into the second book and back into this world she has created.

Forced to flee her city, Allie must pass for human as she joins a ragged group of pilgrims seeking a legend, a place that might have a cure for the disease that killed off most of civilization and created the rabids, the bloodthirsty creatures who threaten human and vampire alike. And soon Allie will have to decide what, and who, is worth dying for…again.  [Goodreads]